Press releases – Hot off the presses and from our archive

Ulm company Axians Infoma GmbH awarded the prize for innovative and forward-thinking local government projects based on Infoma newsystem for the fifth time. And the city of Düren, located in North Rhine Westphalia, took home the award for the second time. Düren impressed the jury with its project to introduce an administration-wide online payment process in its citizen portal and for payment requests. The cities of Marsberg and Borgholzhausen, both also located in NRW, also qualified as finalists. A cash prize comes along with the rewards, intended for use in a social project of the winner’s choosing. Axians Infoma will be awarding the Innovation Prize once again in 2018.

For Dr. Jens Weiß from the Hochschule Harz, who reviewed the numerous applications once again this year, the city of Düren’s project was a “model eGovernment innovation with clear added value for citizens which optimizes internal processes.” The range of services offered allows citizens to submit both applications and payments from home. It also simplifies work for the city’s administration by correctly assigning receivables to bookings in just a few clicks. The city distributed the prize money of 5,000 euros to six social services in the town, including Frauen helfen Frauen (Women Helping Women), Kinderkulturfest (Children’s Cultural Festival), Sozialwerk Dürener Christen (Düren Christian Social Work Association), Dürener Tafel (Düren Table), the Thomas-Morus-Haus, and the Papst-Johannes-Haus.

The two finalists also both submitted impressive innovations. The town administration of Marsberg qualified as a finalist with its project “Introducing mobile order data recording to utilities,” which aimed to optimize order and time recording processes for utility employees and administrators. These processes had previously been completed manually, making them much more time-consuming. In Professor Weiß’s view, this was an outstanding digitization project with a clear added value. It also demonstrates the opportunities digitization offers even to seemingly less IT-focused local government departments. Marsberg used its prize winnings of 2,500 euros to support the Seniorentreff e.V. and the Kath. Hospizverein Marsberg e.V. (Senior’s Meeting and Catholic Hospice Association).

The city of Borgholzhausen was also named a finalist for its successful digitization project in a very small local government. The project, “Introduction of a creditor and debtor invoice workflow based on Infoma newsystem” makes the city of just over 8,700 inhabitants a role model for others of its size. One reason the city decided to take on the project was to optimize its processing for incoming and outgoing invoices and fee notifications, for instance by eliminating duplicate data recording. The city’s initial foray into electronic processing in administrative processes and its obligation to switch over to eInvoices were also key factors in the decision. Borgholzhausen distributed its prize winnings of 2,500 euros to the Familienzentrum Borgholzhausen (Borgholzhausen Family Center) and the Fördervereine Violenbachschule Standort Süd und Nord (Volienbach School North and South booster clubs).

Oliver Couvigny, CEO of Axians Infoma, sees these Innovation Prize applications as representing a significant shift from those received for the first competition in 2013: “At the beginning of the competition, the projects submitted mainly focused on handling new types of taxes in budgeting and reporting systems. Today, over 80 percent of them focus on digitizing work processes, with the goal of making administrative work more efficient and generating better services for citizens. This means that, more and more, local governments are recognizing and utilizing the opportunities digitization offers – and the ways it simplifies administrative work.”

Axians Infoma Innovation Prize 2018
The Innovation Prize will be awarded once again this year. Dr. Jens Weiß from the Harz University of Applied Sciences will once again be selecting the prize winners. The application deadline expires on August 31st 2018. 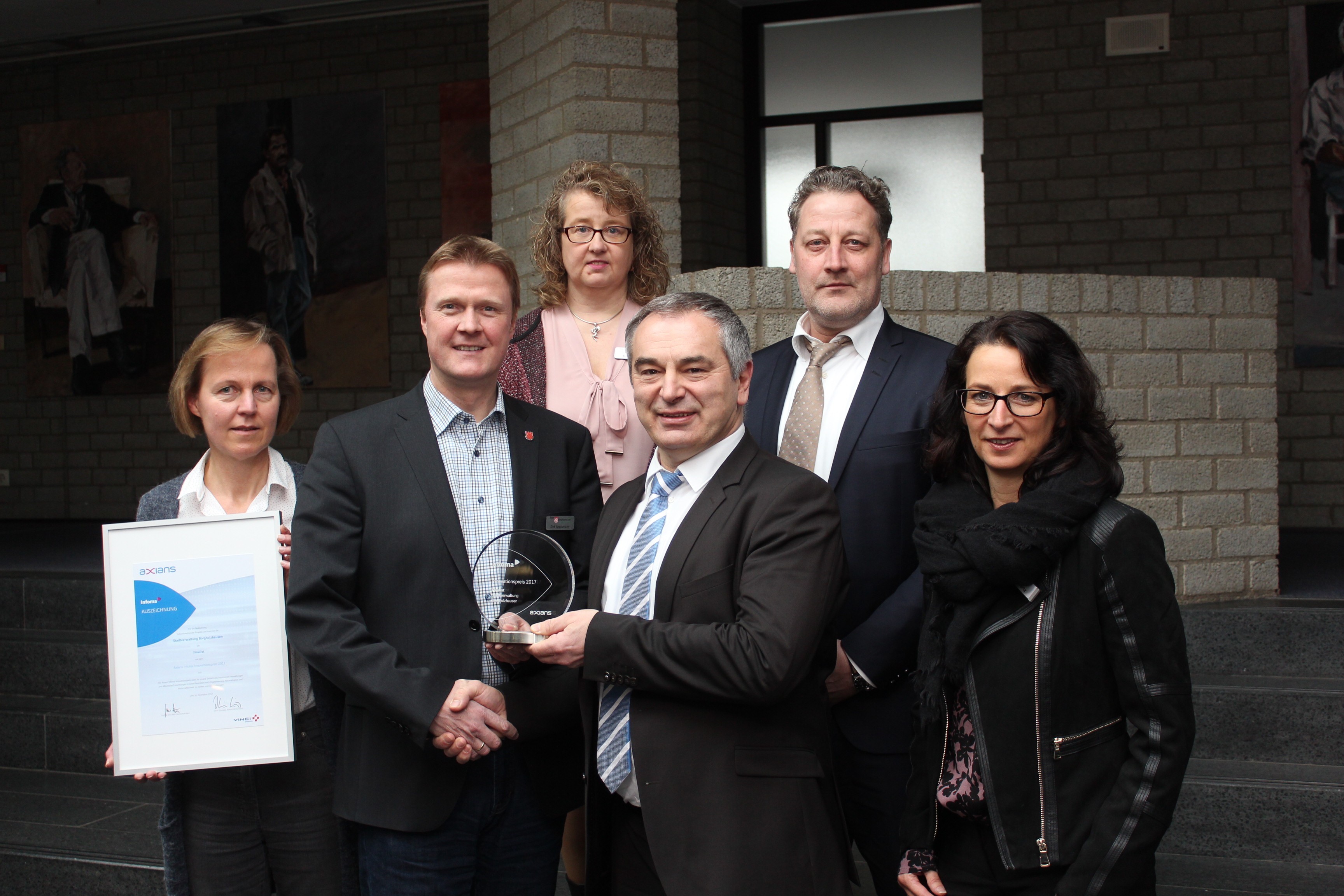 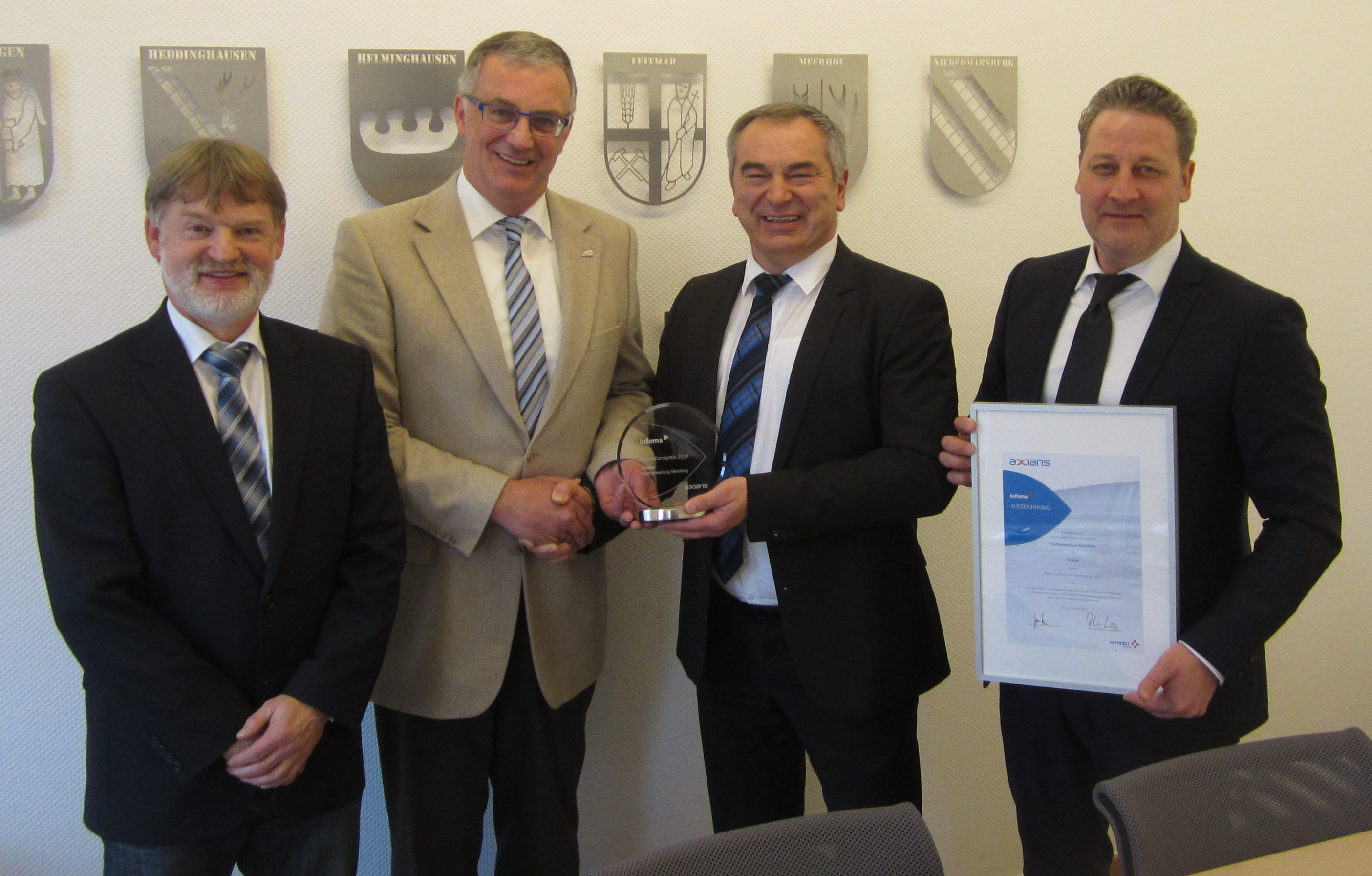